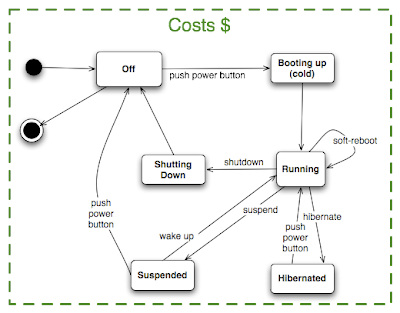 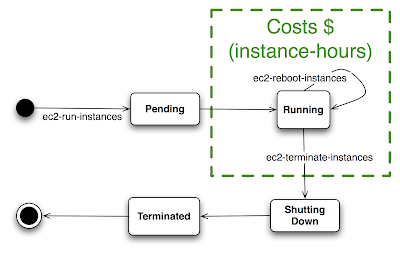 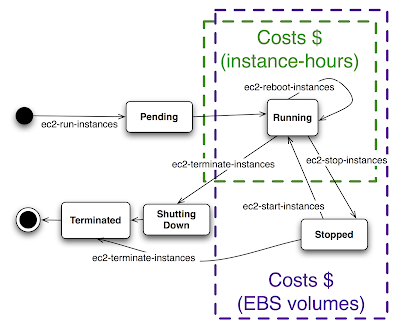 […] EBS-backed AMI [2]. These two AMIs exhibit a number of differences, for example in their lifecycle [3] and data persistence characteristics […]

I found out the hard way that terminated instances with ebs boot partition cannot be restarted, haha. luckily it was just during a test, so nothing was lost.

Thanks for your article, good casual read.

I wonder how long these transitions take. The new micro option is starting to look attractive for my modest needs. If I set my SSH ProxyCommand to ec2-run-instances or ec2-startup-instances (plus socat magic), how soon will the machine be available?

I asked ServerFault and it seems to fall in the one-three minute range, but with some variability and no guarantee that there is a machine available at all.

Yes, it can take a few minutes. That SSH ProxyCommand is a cool idea, but it’s not appropriate for seldom-but-immediate need.

Thanks for the great post (especially the diagram explaining EBS boot).
Is it possible to use auto-scaling to automatically revive an EBS instance that has been stopped?

Autocscaling is only capable of launching new instances, not starting stopped instances. That’s a very interesting idea, though. It would require using your own autocscaling framework, not Amazon’s.

darn good analysis here.
what about detaching the EBS ? during a stop. is that possible.
how to make a S3 backed instance.

Can a unit be stopped from the pending state?

Could this diagram be upgraded to show the states that get read back, like “stopped”, “pending”, “running”, “stopping” ?

An instance can only be stopped from the “running” state:

Thanks for the nice explanation, Shlomo.

One thing I missed in the article, though, is that if you are using ElasticIP, the moment you stop your instance and do not dissociate and release the ElasticIP from your instance, you are charged a small hourly fee for the time it is off.

One other think that users should be very aware of is when they create an instance and let it on 24/7 for long time. They should really consider using reserved instances… for the sake of their pockets.

Thanks for pointing out the Elastic IP charges and other ways to keep costs down. This post is meant to explain the instance lifecycle and when you are charged for instance usage – costs associated with other resources – such as networking, storage – are extra.

[…] for successful management of EC2 instances is a good understanding of their life cycle. There are some resources on the topic, but they do not concern Spot Instances, are partly outdated and do not have […]