I discovered an interesting feature of Amazon EC2 Elastic Load Balancing today: you can add an EC2 instance to more than one ELB virtual appliance. Below I demonstrate the steps I took to set up two ELBs each containing the same instance, and afterward I explain how this technique can be used to deliver different classes of service.

How to Set Up One Instance Belonging to Multiple ELBs

I set this up using the standard EC2 API and EC2 ELB command-line tools. First I launched an instance. I used my favorite Alestic image, the Ubuntu 8.04 Hardy Server AMI:

My default security group allows access to port 80, but if yours doesn’t you will need to either change it (for this experiment) or use a security group that does allow port 80. Once my instance was running I sshed in (you should use your own instance’s public DNS name here):

In the ssh session, I installed the Apache 2 web server:

Then I tested it out from my local machine:

The result, showing the HTML It works! means Apache is accessible on the instance.

Next, to set up two load balancers. On my local machine I did this:

Once the load balancers were created, I added the instance to both as follows:

Okay, EC2 accepted that API call. Next, I tested that it actually works, directing HTTP traffic from both ELBs to that one instance:

Both commands produce It works!, the same as when we accessed the instance directly. This shows that multiple ELBs can direct traffic to a single instance.

What Can This Be Used For?

Here are some of the things you might consider doing with this technique.

Using two different ELBs that both contain (some of) the the same instance(s) can be useful to create different classes of service without using dedicated instances for the lower service class. For example, you might offer a “best-effort” service with no SLA to non-paying customers, and offer an SLA with performance guarantees to paying customers. Here are example requirements:

The ELB forwarding specification is called a listener. A listener is the combination of source-port, protocol type (HTTP or TCP), and the destination port: it describes what is forwarded and to where. In the above demonstration I created two ELBs that both have the same listener, forwarding HTTP/80 to port 80 on the instance. But the ELBs can also be configured to forward HTTP/80 traffic to different destination ports. Or, the the ELBs can be configured to forward traffic from different source ports to the same destination port. Or from different source ports to different destination ports. Here’s a diagram depicting the various possible combinations of listeners: 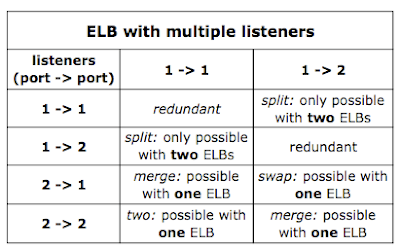 Granted, the error message misidentifies the problem, but it will not work.

Where does that leave us? The only potentially useful case for using two separate ELBs for multiple ports, with the same instance(s) behind the scenes, is where you want to split traffic from a single source port across different destination ports on the instance(s). Practically speaking, this might make sense as part of implementing different classes of service using the same instances. In any case, it would require differentiating the traffic by address (to direct it to the appropriate ELB), so the fact that the actual destination is on a different port is only mildly interesting.

Putting the same instance behind multiple load balancers is a technique used with hardware load balancers to provide redundancy: in case one load balancer fails, the other is already in place and able to take over. However, EC2 Elastic Load Balancers are not dedicated hardware, and they may not fail independently of each other. I say “may not” because there is not much public information about how ELB is implemented, so nobody who is willing to talk knows how independent ELBs are of each other. Nevertheless, there seems to be no clear redundancy benefits from placing one EC2 instance into multiple ELBs.

With Auto Scaling – Maybe, but why?

In short, the interesting feature of ELB allowing an instance to belong to more than one ELB at once has limited practical applicability, useful to implement different service classes using the same instances. If you encounter any other useful scenarios for this technique, please share them.

Would you happen to know what algorithm the ELB uses behind the scenes ? Is is round-robin or is it smarter ?
thanks….

You've come to the right place. Check out this article on my blog:

[…] the request to the alternate port (maybe 8443 for example). As a side note, you can indeed attach an EC2 instance to multiple ELBs via the Command Line Interface (CLI) – something that is not exposed within the console. At […]

I have a question, is it possible for an instance to fetch the ELB values without AWS-CLI or APIS when an ELB is attached to it ?

No. The only metadata available without API calls is instance-specific information.