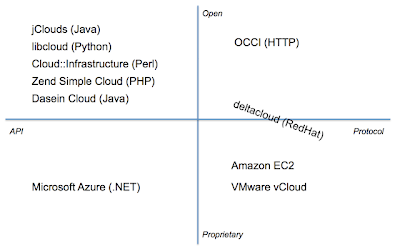 8 replies on “What Language Does the Cloud Speak, Now and In the Future?”

I came to this expecting something awful. Read the first couple of paragraphs, having seen plenty of monsters (check some of the Grid stuff) but – yes! You got it. (Soon I will read the rest of your piece 🙂

Great info. Thanks for clarifying.

Nice post. Couple of comments. You didn't include Rackspace, which is too bad. They have a REST API for their CloudServers product. Also, is it try that Azure is only an API? I think they have a REST API around management. They also have REST api's around their storage and queue services.

Yeah, azure is kind of an odd duck right now. I'm trying to find more about it but their web site is much harder to navigate and it's clear that they expect most of their users to access it via the very tightly integrated visual studio tools. Still, they do have REST interfaces behind a lot of these things which should make it possible to use them in different ways.

True, I didn't include Rackspace – they would go in the same box as Amazon and vCloud.

I did struggle with where to put Azure. First, it's more of a Platform than Infrastructure, so I'm not sure it's 100% consistent to have it on the chart at all (since the rest of them are Infrastructure). Second, as you mention, it's both an API and a protocol. Third, it's not a standard at all.

[…] former interface is well covered, with a large number of interfaces attempting to either be the sole vehicle for cloud management, or to map heterogeneous options to a […]

Good article with great content about the use of RESTfull APIs for IaaS clouds. I think the use of REST and http is equally important to PaaS clouds to perform CRUD operations on applications that are expected be hosted on that platform. The upcoming Apache Stratos (http://stratos.apache.org/) is an example PaaS I came across which will contain a RESTfull API from its next major release to manage applications, deploy applications, autoscale and etc . Currently Apache Stratos is used by WSO2 Public Cloud (https://cloud.wso2.com/) which has an app cloud and an api cloud.