by Shlomo Swidler on February 11, 2016
in Consulting 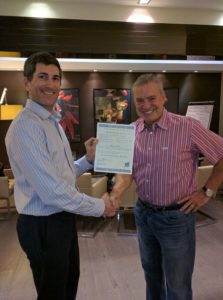 Shlomo Swidler, CEO of Orchestratus, is the newest inductee into the Million Dollar Consultant® Hall of Fame, the first Israel-based member of the 70 people in the world so honored.

Criteria for membership in this elite group include:

The citation on the award includes:

…the distinction of being regarded by peers as one of the world leaders in consulting, as evidenced by empirical accomplishments in client results, professional contributions, and intellectual property.

The announcement was made in front of a capacity crown at a ceremony held at Caesar’s Palace in Las Vegas, NV conducted by Alan Weiss, Ph.D., the globally acclaimed “consultant’s consultant.” Dr. Weiss himself holds multiple awards in the consulting and speaking professions, and is the author of more than 50 books, include Million Dollar Consulting.

Dr. Weiss noted of the six 2016 inductees, “These people are readily acknowledged by their world-class peers to be fitting inductees. I’m proud to have been associated with all of them, and delighted that this is truly a worldwide class of inductees.”

Blog: The Business of IT